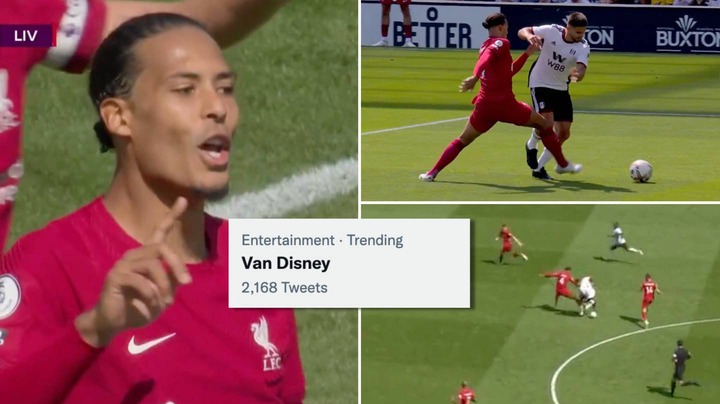 Virgil van Dijk is being called 'Van Disney' on social media after a poor performance in Liverpool's 2-2 draw with Fulham.

The Reds came from behind twice at Craven Cottage on Saturday afternoon and van Dijk had a torrid time against Alexsandar Mitrovic.

The Serbia international scored a brace and was a thorn in the side of Liverpool's defence for the full 90 minutes.

During the second half Mitrovic managed to body Jordan Henderson and have a run at van Dijk, who failed to dispossess his opponent.

Van Dijk is regarded as one of the best one-on-one defenders in world football and he wanted absolutely nothing to do with Mitrovic.

Unfortunately for him, Mitrovic was back for more in the 72nd minute and van Dijk brought the Serbia international down in the penalty area and referee Andy Madley pointed to the spot.

Liverpool players were furious with the decision but van Dijk knew he'd made a mistake.

It is the first time van Dijk had been dribbled past by an opponent and conceded a penalty in a single Premier League game since joining joining Liverpool back in 2018.

Aleksandar Mitrović is loving it out there! ⚽️⚽️

He tucks home the penalty he won to restore Fulham's advantage 👌

What a day for the newly promoted side so far! pic.twitter.com/4gZPTQu9B7

Mitrovic stepped up and put his spot kick past Alisson, giving Fulham the lead for a second time.

Cameras cut to Liverpool manager Jurgen Klopp on the sidelines and he looked less than pleased.

You can check out some of the tweets below.

Mitrovic has had Van Disney on strings all game 😭

Nobody gonna talk about that Van Disney disasterclass? Mitrovic had him on strings all game 😭 pic.twitter.com/Uysq5acohp

They tried to compare Van Disney to Maldini! You’ll pay for your sins!!

Van Disney tryna use his aura on Mitrovic pic.twitter.com/XAH3xjKIw1

Darwin Nunez and Mohamed Salah scored equalisers after each of Mitrovic's strikes to ensure the points were shared.

A number of players were missing through injury and Thiago went off with a suspected hamstring injury.

Klopp told BT Sport in his post-match interview: "The best thing about the game is the result, that we get a point from a really bad game from my side. The attitude was not right in the beginning, we wanted to fight back but we don't find it as easy any more.

"The result is fine, we don't deserve more than that but the performance is massively improvable."