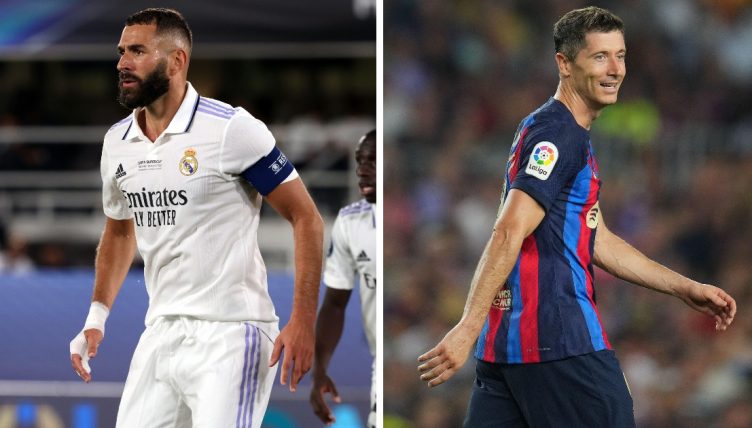 The era of Lionel Messi and Cristiano Ronaldo’s rivalry at Barcelona and Real Madrid is over, but the 2022-23 season could see a new rivalry emerge between the two Spanish giants who boast arguably the best two strikers in the world, Karim Benzema and Robert Lewandowski.

Benzema is the odds-on favourite to lift the Ballon d’Or later this year. The France international enjoyed the best season of his career last term, finishing top scorer in La Liga and the Champions League as Los Blancos won both trophies.

He’s kicked off the 2022-23 campaign with a goal in the UEFA Super Cup and is arguably the best player in the world on current form. He’s overtaken Madrid legend Raul to sit behind Ronaldo as the club’s second all-time top scorer.

“We are here mostly because of him – he scored many important goals. There are no doubts about who should win the Ballon d’Or, it should be Karim.”

Being awarded the golden ball will see Benzema achieve something Lewandowski has not yet managed.

The Poland international controversially missed out on the award after proving Bayern Munich’s talisman in their treble-winning 2019-20 campaign, with organisers France Football cancelling the award following the coronavirus-hit campaign.

“Robert, you deserve your Ballon d’Or. Last year, everyone was in agreement to say that you were the big winner of this award,” Messi said in his speech when collecting the 2021 award.

“Hopefully France Football will give you the 2020 Ballon d’Or. We all believe you deserved it and I hope you can have it at home.”

The two players are tied in third place behind Messi and Ronaldo in the Champions League’s all-time top scorers list with 86 goals in the competition apiece. Benzema is just eight months older than Lewandowski, while both players remain at the peak of their powers as they approach their mid-thirties.

But how do the two players compare in recent years?

We’ve taken a look at their respective club stats since the beginning of the 2018-19 season, when Benzema stepped into Ronaldo’s shoes as the focal point of Madrid’s attack in a role comparable to that of Lewandowski at Bayern.

Of course Karim Benzema gets in on the goals! 🔥