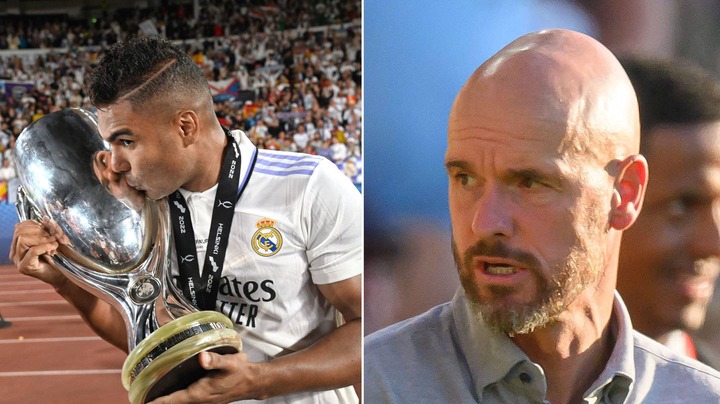 Manchester United are interested in Casemiro as they're struggling to sign Frenkie de Jong from Barcelona, according to stunning reports.

Erik ten Hag singled out De Jong as a key transfer target this summer, but, as of yet, he's no closer to completing the transfer of his former player.

The Dutch midfielder has been the subject of intense transfer speculation, with Man United failing to strike a deal with the Spanish giants.

And it appears they have another target in sight in the shape of Real Madrid star Casemiro.

That's according to Spanish outlet Marca, who claim the Brazilian is an option for Man United as they seek to reinforce their midfield ahead of transfer deadline day.

Real have not received any offers, with the report claiming that no one at the club escapes market movements.

The 30-year-old has been on Real's books since 2013 and played a key part in his side's success last season.

Casemiro has played over 300 games for the club and is a vital member of Carlo Ancelotti's star-studded squad.

So, a move away from Spain appears unlikely considering his importance to Ancelotti.

But, as mentioned above, if Man United enter talks with a huge offer, then it could change the La Liga champion's minds over Casemiro.

Ten Hag is on the hunt for new talent following his side's awful start to the new Premier League season.

They've lost their opening two games to Brighton and Brentford.

Speaking after the crushing 4-0 defeat to Brentford, the Dutch boss begged the board to let him recruit new players.

"We need new players and quality players," he said.

"We’ll do everything to convince them to come."