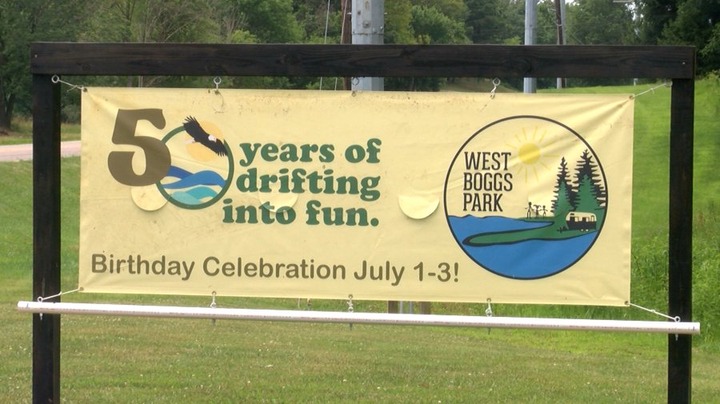 “We wanted to kick off the day with a doubles disc golf tournament, nothing big, nothing sanctioned, just so we could get out here having a good time and meeting one another.”

The tournament was the start of a long day of activities at the park as the weekend marked 50 years since West Boggs opened its doors.

The park hosted food vendors, a rock-climbing wall and much more on Sunday. Hibbs said the day would culminate in live music performance and fireworks show to celebrate the Fourth of July.

Hibbs said the disc golf course opened at West Boggs about a year ago. He said it’s a part of efforts to renovate the park that has been ongoing for the last several years, including more accommodations for those with disabilities thanks to the Americans with Disabilities Act.

“We’ve repaved our roads. We put in new curiosity docks, we have a lot of ADA-accessible amenities out here now. I have an order of big ADA-compliant fishing piers,” he said. “We’ve put in a new fish cleaning station because of the impact of that and obviously we have the disc golf course going on.”

The disc golf course has helped build a community around both Martin and Daviess counties, according to Jake Hager, who played in the tournament.

“A lot of people have really got together. We have our own little Facebook page [for disc golfers] around Martin County,” he said.

Hibbs said the goal of the project was to draw more people to the park by offering a wide variety of activities.

“That’s the essence about this park. We have West Boggs lake, which is a great draw. You have great fishing, you have the boating recreation out there, we have a huge campground which draws a lot of folks. A lot of good upgrades to our facility. But now we’re getting into the fun stuff,” Hibbs said

And by drawing more people, the park can help the surrounding communities.

“It’s a great regional draw. We get a lot of tourists come in from outside of the county. And the local community relies on that,” he said. “We have a really good impact on our local economy by drawing people in from about a 50-100 mile radius.”

Hibbs said over the next several years, the park hopes to revitalize its beach area with new pickleball and volleyball courts along with a new beach house.