"I think Darwin Nunez just walked into Joachim Andersen, it wasn't even a headbutt!" 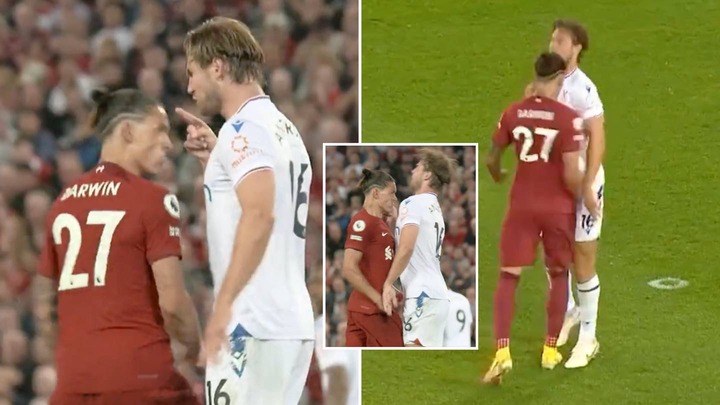 Liverpool striker Nunez was sent off in Monday's 1-1 draw at Anfield after moving his head towards Andersen's early in the second half.

The 23-year-old will now serve a three-match ban for violent conduct and manager Jurgen Klopp looked furious on the touchline.

Former Reds midfielder Hamann believes Nunez didn't plant a 'proper headbutt' on his opponent however and just 'walked into' him.

A moment of madness from Darwin Núñez and he's shown a straight red card! 🤯 pic.twitter.com/YAErzuuUKq

The ex-Germany international did admit Nunez's actions were unacceptable however.

Hamann continued: "He shouldn't do that though I agree. When I first saw it in real-time I thought the defender maybe made a little more than it was. Afterwards, you saw he hit him on the chin.

"I'm not sure there is extensive force with his head I think he just walked into him. Of course he shouldn't do it and he let himself down and his team down."

👀 “I think Nunez just walked into him! If it was a proper headbutt I would understand.”

Palace took the lead in the first half through Wilfried Zaha, despite Liverpool's dominance.

They surprisingly looked even more motivated after going down to 10 men and Luis Diaz equalised with a sublime solo effort four minutes after Nunez's dismissal.

Klopp was asked about the Nunez incident at full-time and he conceded the Uruguay star was deservedly given his marching orders.

He told Sky Sports: "There was provocation but it was definitely the wrong reaction.

"It was a clear red card. We cannot deny that. Unfortunately [he is out] for a few games now and that is not cool for us in our specific situation but that is how it is.

"I haven't [spoken to Nunez] yet, but of course I will. I won't speak with him for three games? I came in and wanted to see the situation, I didn't know what happened in the game. I saw Andersen on the floor and Darwin walking away, that was my picture."

Meanwhile, Andersen received a torrent of abuse on social media with '3-400' messages hitting his Instagram account after the match.

The 26-year-old wrote: "Got maybe 3-400 of these messages last night. I understand you support a team but have some respect and stop acting tough online."

After sharing a few examples of messages he'd received, Anderson stated: "Hope Instagram and the Premier League do something about this."