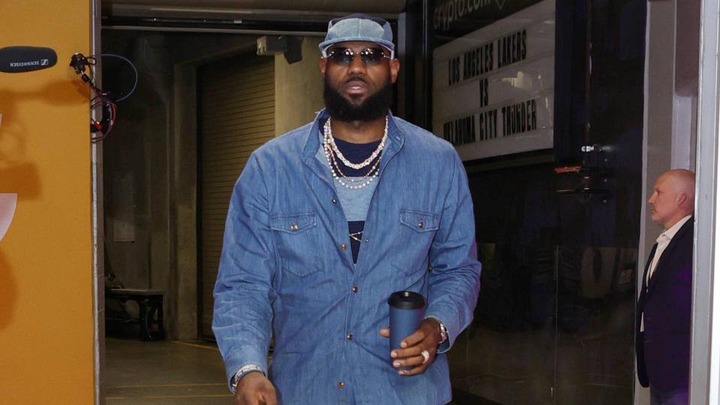 LeBron James isn't making a career switch, but his presence will be felt at the NASCAR FireKeepers Casino 400.

On Sunday, Aug. 7, Chris Buescher's No. 17 car will feature numerous references to James' humanitarian efforts, including the logo for the LeBron James Family Foundation and multiple mentions of James' I PROMISE School in his hometown of Akron, Ohio.

Following the reveal of the new look of the No. 17 car, James took to Twitter to share his excitement, sharing that it's "for the love of my kids and families."

Why is LeBron James featured on Chris Buescher's No. 17 car?

James is one of the biggest stars that the NBA has ever seen, partly because his stardom is not limited to the realm of the basketball world.

Since 2011, James has held a minority ownership stake in Liverpool FC, a stake that was increased in 2021 when James and business partner Maverick Carter became official partners of the Fenway Sports Group (FSG). In addition to the Red Sox and Liverpool FC, FSG is a parent company of RFK Racing, the stock car organization that fields Buescher's No. 17 car as well as Brad Keselowski's No. 6 car.

The partnership paved the way for James' foundation and school to be prominently featured in Sunday's race.

As big of a star as James is, it should come as no surprise that Sunday is not the first time that his name or likeness was featured on a stock car.

In 2005, an animated version of James appeared on Bobby Labonte's No. 18 car for the Sharpie 500 at Bristol Motor Speedway.

The collaboration, which was done as part of a partnership with Powerade, led to a 20-year-old James attending the race in Tennessee.

LeBron's presence at the FireKeepers Casino 400 is a reminder that the NBA and NASCAR worlds have been intertwined for some time now.

The most notable example is Michael Jordan.

In 2020, Jordan, along with Denny Hamlin, founded 23XI Racing, an organization that fields Bubba Wallace's No. 23 car and Kurt Busch's No. 45.

While Jordan now has the biggest ownership presence by far, former No. 1 overall draft pick Brad Daugherty has long been involved in NASCAR as a broadcaster and former team owner.

Among other NBA stars to have made appearances at NASCAR races are Magic Johnson, Yao Ming, Dirk Nowitzki and Shaquille O'Neal.