Ajax winger Antony is reportedly fearful his transfer to Manchester United could be in jeopardy due to the Dutch club’s valuation of their most prized asset. 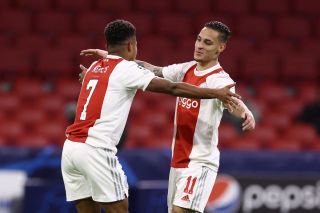 According to The Telegraph, United’s focus now has been on competing with Arsenal for the signature of Antony’s Ajax team-mate Lisandro Martinez.

The defender, who stands at 5ft 9in tall, appears to have become United’s main defensive target this summer and it would be a blow if he opted to join Mikel Arteta’s side instead.

Both Premier League clubs are understood to be in the market for defensive recruitments, but Martinez has previously played a defensive midfield role under Erik ten Hag in Amsterdam, although he has learned to master the dark arts of defensive play since 2020.

As for Antony, I wrote in a piece earlier today that the Brazil international could be priced out of a move if United’s recent £51m bid (via Goal) was rejected by Ajax who deemed the offer £20m short of their valuation.

A good agent will try to talk Ajax into lowering their asking price, especially if his heart is set on a move to Old Trafford, but there can be no guarantees as they haven’t done Ten Hag any favours since he became United manager this summer.

Let us know in the comments section if you think United will sign both Martinez and Antony this summer?