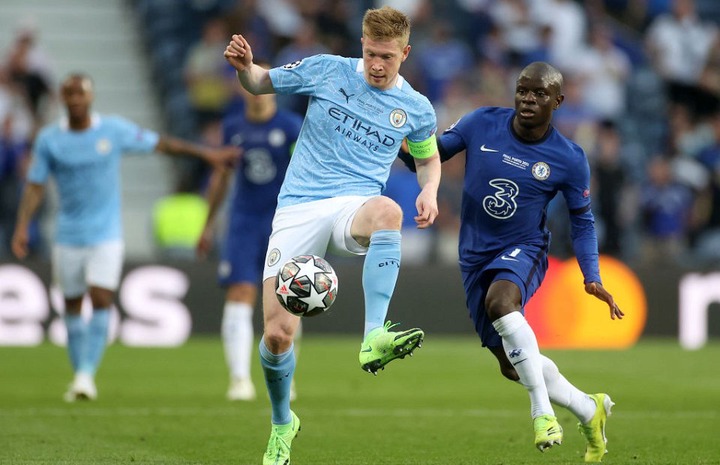 He has been in incredible form for Manchester City and Belgium over the past few years.

It would be very hard to leave De Bruyne out when picking the best five-a-side team in the world.

But who does the Belgian think would make the greatest five-a-side team in the world in 2022?

Earlier this year, De Bruyne sat down for an interview with former Manchester United and England defender, Rio Ferdinand.

Ferdinand asked De Bruyne to select a team consisting of current players that would beat any team in the world on a ‘medium sized pitch’.

De Bruyne refrained from picking himself. He decided against picking a goalkeeper and instead selected a defender, two midfielders and two forwards.

Ferdinand posted the video on his YouTube channel, ‘Rio Ferdinand present FIVE’, and you can view it below…

“I think he’s up there,” De Bruyne said when asked if Van Dijk is the best defender in the world. “He was unbelievable before his injury.

“He came back to a real high level. It’s very difficult always to say ‘he’s better than him…’ but he’s probably top three in the world alongside Ruben [Dias] and some other players. I think he deserves it.”

“I need to have [N’Golo] Kante,” De Bruyne said of the Chelsea star.

Kante and De Bruyne have battled it out in the middle of the park numerous times over the years.

The only City player that De Bruyne selected in his side was Silva.

“In small spaces he’s unbelievable. He reminds me a bit of David [Silva]. He’s a wind-up, people hate that about him. He gives you a little bit of everything. His quality this year has been unbelievable,” De Bruyne said of his teammate.

Messi needs no introduction. He’s one of the greatest players of all time and remains one of the very best in the world at 35 years old.

After a poor 2021/22 season, Neymar has started the new campaign on fire. He could well finally win his first Ballon d’Or trophy in 2023.

His speed, ball control and wide array of skills means he will thrive in a five-a-side match.

QUIZ: At what club did these 40 players make their professional debut?