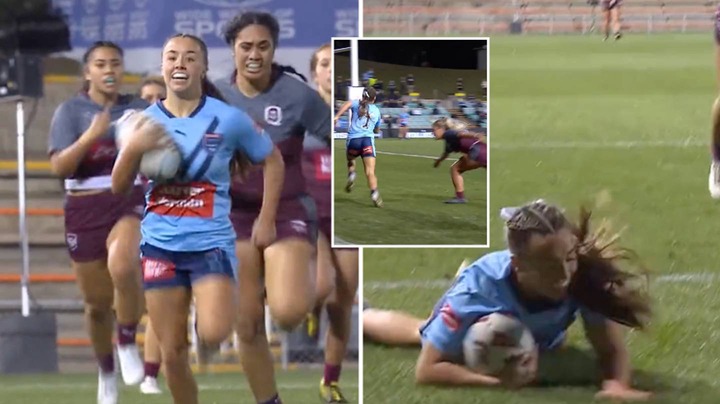 New South Wales sealed a win in the Women’s U19s State of Origin thanks to a mammoth 110-metre try that stole the show.

Fullback Jada Taylor was deservedly awarded the Player of the Match after finishing the game with two tries and a try assist.

It was her second try that left teammates, opponents, and fans alike amazed and shocked as she ran the full length of the field to secure the 22-6 win.

Collecting a grubber kick in the in-goal, she proceeded to evade a tackle, to get out of the area before stepping two QLD players in a seriously impressive feat - getting out of a situation that would normally force a line drop-out.

She wasn’t done yet, however, as put on the backburners and set course for the try line.

She couldn’t be stopped as she evaded the Queensland defence with a blistering pace, and probably carried the ball out of Leichhardt Oval and all the way home without getting tackled, considering how far away the opposition defence was.

As she reached the try line, she put the ball down and collapsed from exhaustion but with a smile on her face.

A serious exclamation point on the victory.

Taylor, who plays for the Sydney Roosters in the NRLW, was humble upon receiving her medal and attributed her performance to the support of her teammates.

I was standing right behind the Jada Taylor fan club as she scored that 109m runaway try. How good. #StateofOrigin @codenrl pic.twitter.com/0Xn0itJtfU

Post-match, she said: “We had a special week in camp so it was very important for us to get out here and put on a really good performance for our state, our families and all of the crowd.

“It’s very important and very special to receive it (Player of the Match award) but I definitely think it’s off the back of a lot of hard work – of my team, not me.”

The official NRLW account tweeted the try with the caption ‘UNBELIEVABLE’ in what is the most appropriate way to describe the try.

She received kudos across the NRL community.

Another said: “One of the best tries you’ll see.”

Whilst a long-time league fan tweeted out their amazement, saying: “In my 70 years of watching league (I) have never seen a try scored from the near-dead ball line by a single runner. Well done.”

Centre Andie Robinson was also in fine form, grabbing a hat-trick as NSW secured their third victory in the Under 19s Women’s series.