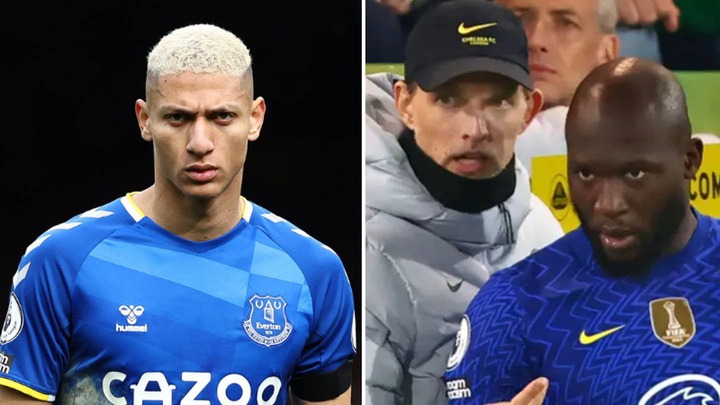 Chelsea players are reportedly backing the club to sign Everton man Richarlison as the replacement for Romelu Lukaku.

The Stamford Bridge club are close to agreeing a loan deal with Inter Milan for Lukaku and will need to bring in extra fire power to fill the gap.

BREAKING: Chelsea and Inter Milan have reached an agreement over a loan move for striker Romelu Lukaku, according to Sky Italy.

And according to The Sun, some of Chelsea’s squad are keen for the club to make a move for Richarlison.

It has been reported that the Brazilian’s fiery style has attracted some of Chelsea’s stars. During his time at Goodison, Richarlison often made the headlines for his gamesmanship antics and he was a vital player in helping the Toffees avoid relegation in the 21/22 season.

Richarlison to Chelsea? Apparently Chelsea have made an enquiry for him, what’s your thoughts on this? pic.twitter.com/XWXuFH2pGL

During a season full of ups and downs, Richarlison managed 11 goals and five assists in all competitions. But his behaviour was often scrutinised, in particular during the 1-0 win against Chelsea at Goodison Park, in which Richarlison was seen handling a smoke bomb and threw it into the crowd. As a result, he was charged by the FA.

Richarlison is believed to have told Everton’s manager, Chelsea legend Frank Lampard, that he sees his future away from Merseyside. With two years left on his current deal, the club is said to have placed a £50 million price tag on their most prized asset.

The Brazilian forward joined Everton from Watford in 2018 in a deal worth potentially £50 million. Since then, he has made a total of 152 appearances across all competitions for the club, scoring 53 goals.

North London duo Arsenal and Tottenham Hotspur are also said to be interested in Richarlison. Chelsea officials do have other players on their list if they choose not to go for the Brazil international.

Manchester City winger Raheem Sterling has been tipped for a move to Stamford Bridge with manager Thomas Tuchel apparently keen on the England man. Barcelona’s French winger Ousmane Dembele is also being linked with a move to the Blues this summer.

Chelsea will be back with new bid soon - as Man City are open to let him go.

Lukaku’s return to Chelsea hasn’t worked out but he did finish the 21/22 season as the club’s top scorer after notching 15 goals.

Chelsea had a decent start to the campaign but tailed off and was eventually left behind in the title race by front runners City and Liverpool.

With just German duo Timo Werner and Kai Havertz as the remaining striker options, Tuchel will be looking to add more to his options as he looks to close the gap between themselves and the top two.