James will take part in the 2023 McDonald's All-American game in March. 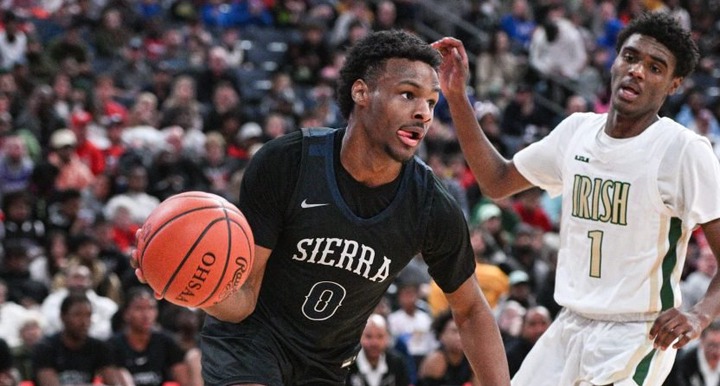 Bronny James, the son of Los Angeles Lakers star LeBron James, has been one of the most high-profile high school basketball players for quite some time. While some believe that he may be a bit overhyped due to his father’s fame, he received a huge honor that speaks to his value as a player.

According to ESPN’s Jeff Borzello, Bronny James has made this year’s McDonald’s All-American game.

Bronny James has been named to the McDonald's All American game.

James is in his senior year at Sierra Canyon High School and is currently listed as the No. 34 prospect in the country by 247 Sports.

It was very well assumed that Bronny would end up going to play at Ohio State, which is his father’s favorite school. However, he also has an interest in both USC and Oregon as potential destinations.

It certainly isn’t easy for someone like Bronny to be in the shadow of someone like LeBron James, but many around high school basketball believe that he has earned the honor on his own merit.

Bronny James has made the McDonald’s All-American Game.

And IMO, he’s earned it.

And let's give Bronny James credit. He's the first to have enrolled at Sierra Canyon from the first day of his freshman year and stayed through his senior year. https://t.co/rC9MQ08lt7

Others seem to believe that he may have been a fringe pick for the game and that his name certainly had a factor in being chosen over other deserving players.

Agree there are players like Foster probably more deserving, but ratings matter and McDonald's was not going to miss an opportunity to have Bronny James in the game, and the buzz is creates.

They had to for marketing reasons, but, lol https://t.co/qrCXjH5JaI

Regardless, this will be another massive platform where James can show off his skills to future college programs. LeBron James has made it clear that he wants to play with his son in the NBA when he becomes draft eligible in 2024.

A great performance in the McDonalds All-American game taking place on March 28th could be the first step for Bronny James to pull off this lofty goal,