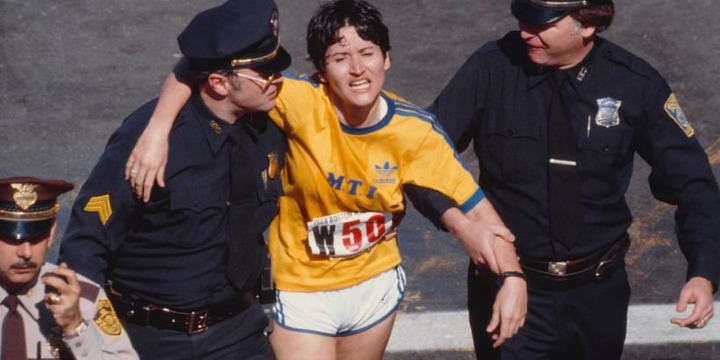 Offbeat news from the world of sport

We have more newsletters

Thousands of runners will descend on London this weekend for the prestigious Marathon race.

Many of those will be looking to raise money for charities of their choice in what is always a special day in the British sporting calendar. But while runners will be pushing their bodies to the limit in the gruelling race, there have been some Marathon runners over the years that have cheated their way over the finish line.

There are some names that have now become infamous as a result of their antics after failing to get away with it. Here are some of the craziest cheat stories from Marathon races across the world.

Rob Sloan finished in third place in the 2011 Kielder Marathon in Northumberland – a race organised by Olympic legend Steve Cram.

Allegations came to light as Sloan failed to attend the medal ceremony with witnesses coming forward saying they had seen him riding the bus during the race.

He initially denied the claims before coming clean to Cram – who said: "People do this in all marathons but the vast majority don't come in the top three." Sloan was later banned by UK Athletics and soon disappeared from the running scene.

The Cuban-born runner hit the headlines in 1980 when she delivered the third-fastest Marathon time ever for a woman in Boston. Ruiz was awarded the gold medal at the end of the race but a week later, her long-standing cheating exploits came to light.

She was not spotted in any photographs during the race until afterwards, appearing at the finish line completely unflustered. It is alleged she intended to join the middle of the pack – but miscalculated and ended up at the very front.

Ruiz's reputation was left in tatters as she only qualified for Boston due to her performance in the New York Marathon, which later also came under scrutiny. A photographer claimed she met Ruiz on the subway during the race and they made their way to the finish line, where Ruiz identified herself as injured but was marked down as a finisher.

The CEO and founder of tech giant Foursquare, Dennis Crowley, completed the Boston Marathon alongside his wife Chelsea in 2014.

Crowley ran with bib number 34001 while his wife wore 34033, which turned out to be a fraudulent number, belonging to another runner.

But the Crowleys insisted there was no maliciousness involved and they created the fake bib after their attempts to run together in 2013 were denied by the bombings in Boston.

The Comrades Marathon in South Africa takes long-distance running to another level with competitors tasked with completing a 56-mile race. And in 1999, the event had its own scandal after Sergio Motsoeneng finished inside the top 10, collecting a hefty financial prize and a medal in the process.

Photos later emerged of the race to raise suspicions with the runner having seemingly switched his watch to his right wrist. On closer inspection, some pictures showed Sergio with a scar on his shin, while others did not.

It emerged that Motsoeneng had been involved in a relay with twin brother Fika, with the pair exchanging their bibs, hats and shoes in toilet checkpoints along the race.

Monika Czarnecka, 41, and her husband Piotr, 42, caused a frenzy after they were photographed wearing the same number (11250) during the 2021 London Marathon.

It later emerged that only Monika was authorised to take part in the event and that her husband, who could be seen running right beside her, had copied it so he could support her.

Ms Czarnecka said: "I'm truly sorry for what we've done and didn't want to cause any harm. The supporters were amazing, and their cheering and clapping helped me finish the marathon and it hurts to think that I've let them down."

Jason Scotland-Williams made the headlines in 2014 when he ran the second part of the London Marathon three minutes faster than Mo Farah.

It was later claimed he jumped a barrier at Tower Bridge, missing a huge 10-mile chunk of the race – but he denies any allegations of cheating.

"I have done nothing wrong. Nobody thinks maybe I just trained hard," he said. "No one things 'maybe he paced himself through the first half and when the second half came he just let himself go."