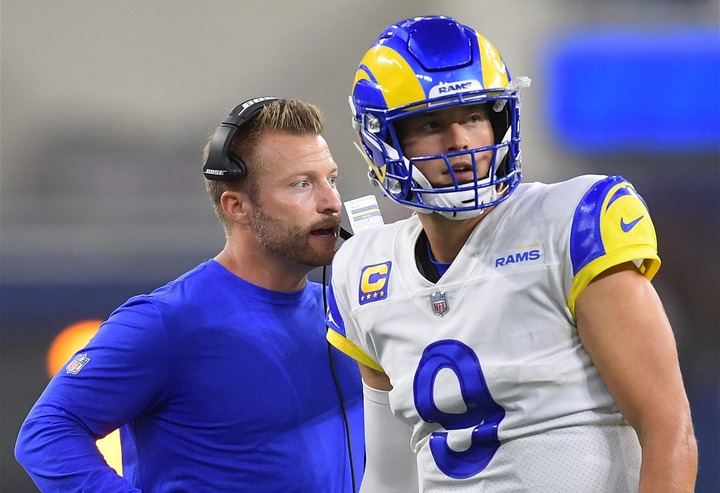 The reigning Super Bowl champions Los Angeles Rams will enter the upcoming 2022 season with a quest to defend their title. At this point, they cannot afford to have any losses or hindrances in practice sessions. But unfortunately, their starting quarterback Matthew Stafford has suffered an elbow injury, spouting trouble over their entire preseason aspirations.

From Inside Training Camp: #Rams QB Matthew Stafford is dealing with a tendon issue in his throwing elbow that’ll limit his throwing in practice. pic.twitter.com/VDSOswmsDI

The primary cause of concern is his throwing hand, which is the most important aspect for any quarterback playing in the NFL. Per reports, it is a similar injury he suffered during the 2021 season; however, he managed to continue with the pain and eventually won himself a Super Bowl.

As soon as the reports went public, Rams head coach Sean McVay gave first-hand clarification on the matter. “a little bit abnormal for a quarterback,” McVay said about Stafford’s elbow pain. However, he affirmed that the pain is not a setback for the 34-year-old, and the ultimate goal is to make him ready to play an entire 17 games season.

“I think anytime that you’ve played as long and are as tough as he is, I don’t know if you’re ever truly pain-free, but the goal would be for Sept. 8 and really looking towards 17 games then hopefully some games after that if we earn that opportunity,” he added.

If not Matthew Stafford, then what are the other options for the LA Rams?

These injuries are not something that Matthew Stafford is unfamiliar with, and hopefully, he gets back soon. Under the leadership of Stafford, the Rams happen to be a formidable side. And with new inclusions like Bobby Wagner and plans of retaining Odell Beckham Jr, the offensive unit will become even stronger.

However, what would be the case if Stafford is unable to step in? Unfortunately, the depth chart of the Rams quarterback room is not great. The franchise will have to go with an undrafted free agent, John Wolford, who appeared in 3 games last season. In his entire career so far, Wolford made 42 pass attempts and registered zero touchdowns against two interceptions.

The other prospects on the list is a Second-year QB Bryce Perkins and rookie Luis Perez, who have no prior experience playing in the NFL. Thus, it becomes crucial for Matthew Stafford to get back on the field as early as possible. Otherwise, the Rams will have to look for other options in the free agent market.