"Since returning from IR, Burks has flashed All-Pro stuff in recent weeks." 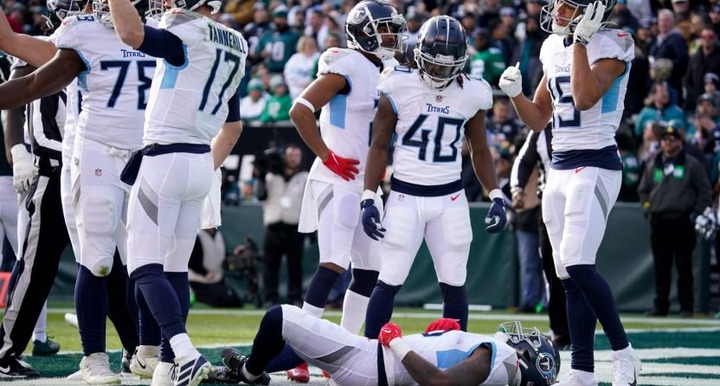 Unfortunately, Treylon Burks may not remember his.

The Tennessee Titans rookie wide receiver beat double coverage to make a great catch for a 25-yard touchdown in the first quarter against the Philadelphia Eagles. But on the play, Eagles safety Marcus Epps laid a huge hit on Burks, who went to the ground on his back, unconscious. Yet he still somehow cradled the football after his first career touchdown.

Holding on through the hit 💪 @TreylonBurks

Officials flagged Epps for unnecessary roughness on the play.

The Titans examined Burks and quickly ruled him out for the remainder of the game with a concussion.

It’s already been a tough season for the Titans’ first-round draft pick (No. 18 overall). He suffered a foot injury earlier this season and missed several games. Now this. He has 25 catches for 359 yards this year.

Fans on Twitter felt bad for Burks, who didn’t even get to celebrate his milestone catch. They also questioned whether or not the hit was really illegal.

“Burks held on as he took a massive shot that drew a penalty against the Eagles … since returning from IR, Burks has flashed All Pro stuff in recent weeks,” tweeted Kevin McPherson.

“Straight up targeting from #22 Marcus Epps. He knew what he was doing targeting Burks. Completely unacceptable,” tweeted another user.

Prayers up for Treylon Burks pic.twitter.com/4BoUBJl62z

What a shame,,, feel so powerless,,, that defender should have been ejected.

All World touchdown reception by Hogs great & Titans rookie WR Treylon Burks @TreylonBurks for his 1st NFL receiving TD … Burks held on as he took a massive shot that drew a penalty against the Eagles … since returning from IRL, Burks has flashed all pro stuff in recent wks https://t.co/LLL3UlQIQn

Straight up targeting from #22 Marcus Epps. He knew what he was doing targeting Burks. Completely unacceptable

Bang bang play. Doesn’t warrant an ejection, maybe a fine. Epps is making a play on the ball

Props to Treylon Burks for that TD catch. Hope he is ok