“Why Did He Do That?”: NBA Fans in Disarray as Jayson Tatum Publicly Destroys 4-Year-Old Son in Front of Hundreds 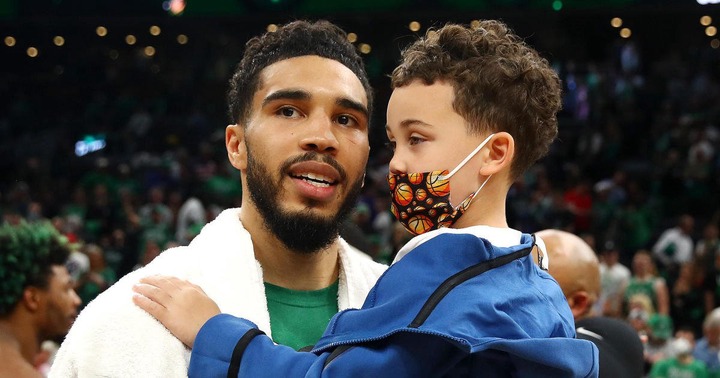 When Jayson Tatum is on the court, he gives it his all every time. He is one of the most competitive players in the league currently as his stock continues to rise after an excellent post-season run. While Tatum lives a very private life, his interactions with his son, Deuce, always seem to catch the eye of the NBA world.

Tatum’s four-year-old son Deuce can be regularly seen cheering his dad on at Boston Celtics games. There have been many moments over the past couple of years where Deuce has won the hearts of the fans. However, Jayson showed no mercy to his son at a basketball camp recently.

Jayson Tatum hosted a youth basketball camp at his old high school, Chaminade College Preparatory School in Missouri. While teaching kids the art of basketball, Tatum let Deuce take the ball and make a run at the basket. In the video posted online, Jayson can be seen patiently following Deuce and waiting for him to take a shot.

As soon as Deuce got his shot up, Tatum mercilessly smacked it out of the picture. It didn’t only leave the kids at the camp shocked, but it also left Deuce surprised with what his dad had done. He couldn’t help but stand at his spot looking seemingly disappointed.

Fans react to the viral clip

Duece already ready for the NBA; where no traveling violations are called!
But gotta love JT as a role model!

the origin of his villain story

Couldn’t beat the warriors, so he’s taking it out on a little kid, freaking Celtics.

Jayson Tatum had a season to remember

Tatum had an incredible season as his Boston Celtics reached the NBA Finals after fending off tough competition in the East. On top of that, he had his best individual season to date as he averaged 26.9 points, 8 rebounds, and 4.4 assists. All of these were career highs for the three-time All-Star.

While Tatum was the poster boy for the Celtics, he had considerable help from teammates like Jaylen Brown and Marcus Smart. Boston has built a strong roster that can likely compete at the highest level in the future.

Tatum’s growth is directly related to the Celtics’ growth. He didn’t perform well according to his standards in the Finals against the Golden State Warriors and it eventually led to the Celtics losing the series in six games. The Celtics and Tatum will be hoping to go one step further next season.