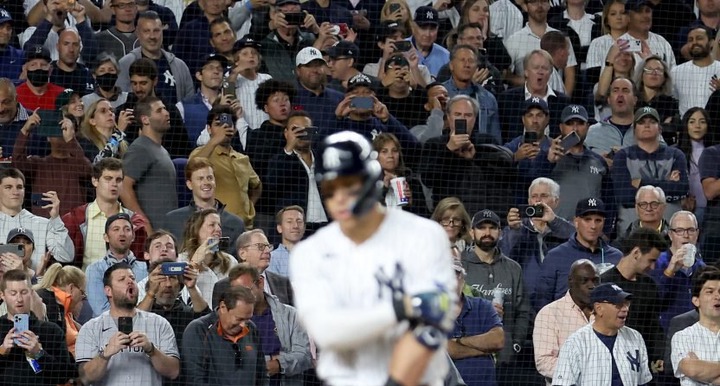 There is much drama surrounding Friday evening’s game between the New York Yankees and Boston Red Sox as Aaron Judge could potentially hit his 61st home run of the season, putting him within one of Roger Maris’ mark. Apple TV+ has exclusive rights to the game and has not acquiesced to requests to share the broadcast or cut-ins with other networks like YES or ESPN because, well, they don’t have to. Now, New York Attorney General Letitia James has gotten involved and demanded that Apple share its goods.

Many people complaining about the situation seem to be under the impression that, to watch the game, you have to sign up and pay for Apple TV+. However, those paying attention have long been noting that Apple provides free access to all MLB games they broadcast, including this one. That actually makes it more available than if the game had been on YES, which is a pay network that requires a cable or satellite package.

Among the people who don’t seem to be aware of this is the New York AG.

Millions of New Yorkers paid their cable bills expecting to see live sports programming. Denying them the chance to watch Aaron Judge step up to the plate to make history tonight is wrong and unfair.

I'm calling on @MLB and @Apple to open up tonight's game to the @YESNetwork.

“Millions of New Yorkers paid their cable bills expecting to see live sports programming,” wrote Letitia James in a tweet. “Denying them the chance to watch Aaron Judge step up to the plate to make history tonight is wrong and unfair.

“I’m calling on @MLB and @Apple to open up tonight’s game to the @YESNetwork.”

The only way this makes any sense is if James is on the YES payroll because otherwise, she’s asking one private entity with exclusive rights to share its content with another private entity that does not have any of those rights, which seems questionable at best.

Not to mention, again, the game is available for free on Apple. There is no barrier to entry for anyone who wants to watch Judge sock a dinger.

The MLB world had some strong reactions to the tweet, with some recognizing reality and others also seemingly confused.

Seems not good NY AG is publicly calling Apple's contractually licensed, exclusive distribution of a baseball game "wrong and unfair" because NY cable customers "expect" to see "live sports", while telling the company to give it to a competitor

(Also: It's free w/o sub on Apple) https://t.co/jGBKGpmGbp

i agree. let's nationalize sports broadcasts. watching baseball is a fundamental right and basic service, on par with water and paved roads, that must be available to all Americans. https://t.co/JZI2yTeVoQ

Tonight’s potentially historic Yankees game on Apple TV+ is FREE for anyone who has internet access.

In this day and age, it is silly to say that a free game on streaming is *more* restrictive than being on YES, a regional sports network that requires a cable subscription. https://t.co/7jVeWsy6Ii

I really hope Judge hits two tonight just because of how stupid the arguments have become about this. https://t.co/Cswz7vyx42

While I want the game to be on traditional TV (and with the YES team calling the game), Apple TV+ isn't putting the game behind a paywall so this has nothing to do with cable bills.

Apple hasn't charged for its baseball streams all season. https://t.co/efcWptb6JH

We can only assume that James will next demand that all Yankees games are free to the public and available on any network.