Bills rookie's tattoo speak of his grief. His play on the field speaks of his resilience.

When you stand face to face with Buffalo Bills rookie cornerback Christian Benford, only then is the quarter-sized tattoo inked onto his right cheekbone visible.

It’s a heart with one half colored in, the other half not.

When you hear the story behind the tattoo, you realize that the 21-year-old from Baltimore has faced far more difficult situations in his life than trying to buck the odds of a small-school player and late-round draft pick earning a spot with an NFL team.

“It’s a half-filled heart because I’ve lost so many people,” Benford explained the other day following a practice at St. John Fisher University. “I lost my mom, some of my closest friends, best friends, some people that I call my sisters and my brothers. It’s like a part of my heart is gone.”

No one his age should have already dealt with the amount of grief Benford has endured, but growing up in a tough neighborhood in a city that has seen its share of troubles, grief is almost inevitable.

“But time don’t stop, the world don’t stop, your job doesn’t stop so you mourn and you make sure you get your heart and mind right,” Benford said.

To his credit, Benford has done that. He escaped the hometown trouble in part because he did well academically at Randallstown High School and parlayed that into a scholarship to Villanova University, a school known for its excellent academics and its men’s basketball team. But not so much for football.

And that was just another challenge Benford overcame, playing in relative obscurity in his pursuit of his lifelong dream of playing in the NFL.

Scouts aren’t exactly clamoring to watch Villanova football players, but he was so productive during his four seasons that a Bills area scout made the trip to Philadelphia to take a look and that started the ball rolling on the team eventually picking Benford No. 180 overall.

Once he was on general manager Brandon Beane’s radar, he kept comparing more favorably to other players as the Bills whittled down their draft board, and it finally got to the point where Beane wanted to meet the young man.

Thus, the Bills used one of their top 30 pre-draft visits - where prospects are invited to Orchard Park for private workouts and in-depth interviews and white board sessions - on the 6-foot-1, 205-pounder. 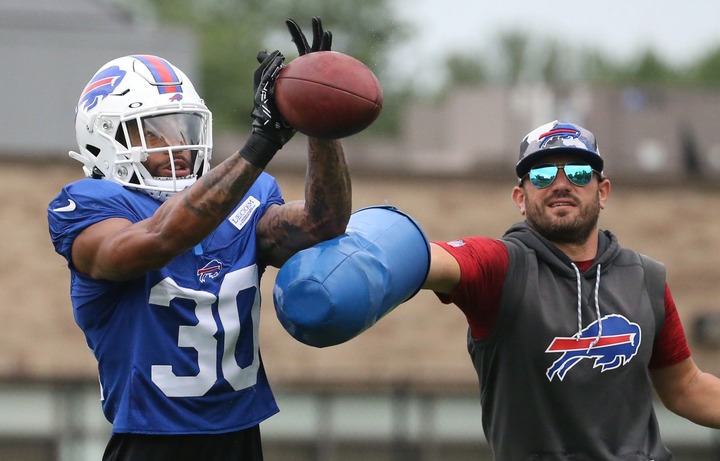 On the field it was clear that Benford could play and that his size and ability would translate to the NFL. But what really popped in that visit was his character and how he had overcome the adversity he had already faced.

“I like those small school guys; I have a special place in my heart for those guys that are not as well known,” said coach Sean McDermott, who played at William and Mary. “And you look at his history and what he’s done and what he’s achieved when the odds have been stacked against him a little bit, both in life and on the football field.

“You study that and there’s something to that, right? People who have been through and faced adversity and develop some resiliency through their life up to this point, and that usually serves them well here.”

In March of 2021, Villanova began its COVID-delayed and truncated four-game 2020 season with a game at Stony Brook. Benford’s mother had been in the hospital for a few days, but it seemed like everything was going to be fine.

“We were texting and she said, ‘I feel good, I’m great,’” he recalled, never actually revealing why she was hospitalized or what ultimately took her life. “She was saying she was gonna leave the hospital and I was gonna go home for a little bit to try and see her. They said she was good.”

Benford took the field that day and made an interception in Villanova’s 16-13 victory, but his elation didn’t last long.

“I was feeling good, and after the game I got a call and they said she passed away,” he said. “So I had to shed some tears, but I had a game the next week and I always told my mom that I want to make it (to the NFL) for our family, make the best for our family.

“So I just continued working, continued playing. Obviously it hurt because I lost some of my closest friends the same year, like back to back, so it kind of kind of took a toll.”

He played the following week in a loss to Rhode Island and by the end of the shortened season he earned first-team all-Colonial Athletic Association honors. He then backed that up with a full 2021 season during which he was first-team All-CAA again thanks to seven interceptions and 18 pass breakups.

Not surprisingly, Benford was not invited to the NFL Scouting Combine or the Senior Bowl, and that may have worked out in the Bills’ favor.

Draft analyst Ric Serritella said, “Remove the FCS sticker from the helmet and Benford looks every bit the part of a player who belongs on Sundays. Few, if any, defenders in the nation got their hands on more balls this past season than Benford. In addition, the aggressive cover man is not afraid to stick his nose in the dirt and help out against the run. As the draft process wears on, more NFL teams will take notice of the sturdy and reliable Benford.”

The Bills took notice the most, and now at training camp, Benford is rewarding their faith. He has made several impressive plays, and he has even earned first-team reps going against Stefon Diggs and Gabriel Davis.

“He’s one of those guys who we felt may have been overlooked by a lot of people,” defensive coordinator Leslie Frazier said. “We were really excited that we were able to draft him and watching what he’s done in the spring as well as what he’s done in training camp, he’s another one of those young corners who has some maturity about him and some instincts and playmaking ability that really gets you excited.”

Benford admitted that being a sixth-round pick plants a chip on his shoulder because he wants to prove that he belongs and that every other team overlooked him. He also added, though, that looking behind him does no good.

“I don’t really do that shoulda, coulda, woulda because there’s no purpose thinking about the past,” he said. “I’m here now so I’m really just thinking about that. The fact that I’m here and making the best of where I’m at right now. I made my spot for a reason and that sixth-round has given me my chip, but it gave me the blessing to even be in this position.”