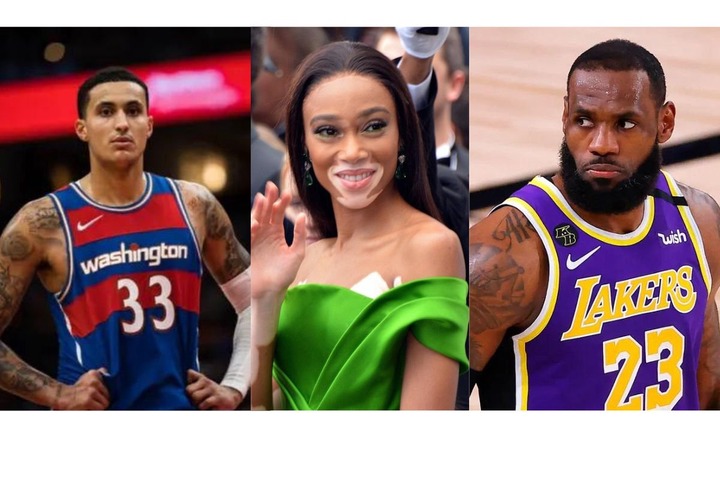 LeBron James was a dominating force last season despite the Los Angeles Lakers completely losing their way before the postseason. The Lakers superstar put on some magnificent performances and broke some unbelievable records in the 2021-22 season. One of his massive performances came against the Washington Wizards earlier this year when he scored 50 points in the game. However, despite his incredible outing, fans on the internet were more intrigued by a married LeBron James staring down Wizards star Kyle Kuzma’s girlfriend.

The Lakers were in deep trouble last season after losing Anthony Davis due to injuries for the most part. Moreover, Russell Westbrook also struggled to perform as the Lakers had a dwindling record in March even after their win over the Washington Wizards.

However, the Los Angeles Lakers defeated the Wizards by 122-109 due to a dominating 50-point performance from LeBron James. Meanwhile, his stare down of Kuzma’s girlfriend Winnie Harlow after scoring a dominating throwdown became the talk of the town among fans.

The four-time NBA champ rushed towards the hoop and slammed the ball home with a rim-rattling dunk. James was all pumped up as he ran towards the crowd sitting behind the hoop. While standing there, James stared down Winnie Harlow for a bit before returning to the court. The moment was caught on camera.

The video of LeBron James staring down the millionaire Canadian fashion model went viral on the Internet, creating a buzz among the fans.

Who is Winnie Harlow?

Winnie Harlow gained prominence when she appeared on America’s Next Top Model in 2014. She is also a popular spokesperson with a net worth of $5 million. Harlow was named the Beauty idol at the Gala Spa Awards in 2015. She and Kyle Kuzma have been together since 2020.

Meanwhile, LeBron James has been married to his high school girlfriend Savannah Briston since 2013. The duo has been going strong since their high school days and have three kids together.

What is your opinion on LeBron’s stare down? Let us know in the comments below.