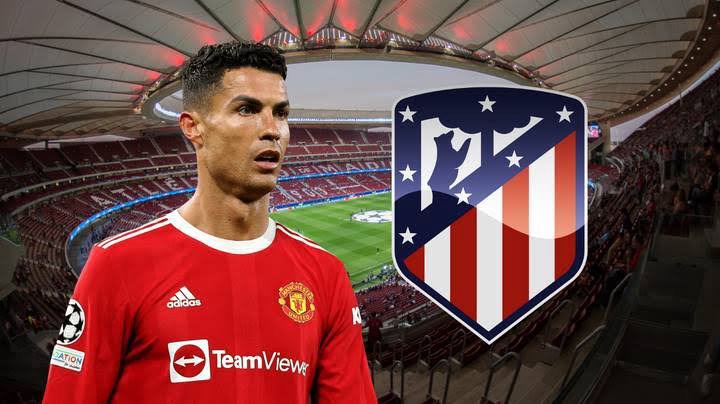 Cristiano Ronaldo may finally find his way to Atlético Madrid, despite Manchester United’s stance to keep him.

Rumors have been stoked of a deal following Man Utd’s 4-0 loss to Brentford in the Premier League on Saturday, after which the Portuguese had a frosty exchange with manager Erik ten Hag.

Ronaldo furiously rushed off the field and snubbed Steve McClaren in the process, refusing to acknowledge the fans who had traveled far to the Gtech Community Stadium.

United were not happy with his gestures during games and threatened to terminate his contract if they don’t see a change in his behavior but the Red devil later moved to deny the reports.

Amidst this controversy, Atleti coach Diego Simeone is said to be the only manager to want the Portugal captain and is pushing hard to make the deal happen.

It is being speculated that the club are doing everything possible to secure the funds for the move and its hierarchy are on very good terms with Ronaldo’s agent Jorge Mendes.

Cristiano Ronaldo’s possible transfer from Manchester United to Atlético Madrid has been one that has been touted for several weeks even before the beginning of this season.

Simeone spoke of Ronaldo ahead of his club’s La Liga opener against Getafe on Monday. In his speech, however, he didn’t deny the rumor of striving to bring in the football legend to Athletico stating that the noise about his move his normal.

“The controversy is normal,” the Argentine tactician told the media. “As for me, I’m only thinking of Getafe, of the footballers who are already here. The only thing that matters to me and concerns me is that.”

Nevertheless, Spanish journalist Guillem Balague has, on his Twitter handle suggested it is a deal that both Ronaldo and Simeone want to conclude.

The tweet of the transfer expert read: “Manchester United have considered the departure of #CR7 for a while, Ragnick thought getting rid of him was essential for the good of the team. But only one club is interested but can’t adjust the numbers.

“[Diego] Simeone wants him at Atletico to do a Luis Suarez with him. And CR7 likes the idea and might explain his behavior.
“Atletico looking at all kinds of possibilities to please Simeone and Jorge Mendes who has an exceptional relationship with the decision makers at the club”

Cristiano Ronaldo has drawn a landmark in the history of football and his records might be unreachable for any other footballer. He is considered the best player in the world and widely regarded as one of the greatest players of all time.

Ronaldo has won five Ballon d’Or awards and four European Golden Shoes, the most by a European player. He has won 32 trophies in his career, including seven league titles, five UEFA Champions Leagues, and the UEFA European Championship.

Ronaldo also holds the records for most appearances (183), goals (140), and assists (42) in the Champions League, goals in the European Championship (14), international goals (117), and international appearances by a European (189). He is one of the few players to have made over 1,100 professional career appearances, and has scored over 800 official senior career goals for club and country

Certainly, Atlético Madrid wouldn’t be a mistake for Ronaldo if he joins the club as they have Champions League football and they are likely to be competitive in terms of winning trophies this season.