Confidence Is A Required Characteristic For Irish QBs 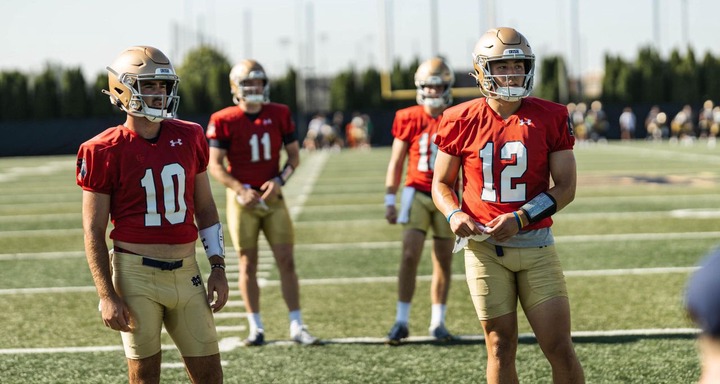 Tommy Rees approached the huddle of his quarterbacks, another humid, sticky August day greeting Notre Dame for its second session of preseason camp, said a few words and turned away.

The message Saturday was unmistakable: on the field, the actions belong to the Irish quarterbacks – Tyler Buchner, Drew Pyne, Steve Angeli and Ron Powlus III.

“I think that’s dead-on, we want those guys to figure it out,” Rees said. “I’m not going to be there to hold their hand, I’m not going to be there on the field with them and you know we want them to take ownership of the offense, because that’s what’s necessary to be a really good offense. So as much as I can take a step back, let them work through things, and obviously we coach extremely hard, have our meetings and film room, but when we’re on the field, we’re trying to empower our guys to be leaders and own the offense.”

In that regard, Rees listens to Aaron Rodgers. Sort of, anyway.

“I think (confidence) is a big thing,” Rees said. “There’s a quote that’s stuck with me forever. Aaron Rodgers talked about it, 10 years ago maybe.

“The No. 1 characteristic in a quarterback has to be confidence.”

Buchner, angling to be Notre Dame’s sophomore starter at the uber-scrutinized position, is seeking to deploy Rees’ confidence-infused, leadership-first approach to the field.

“I think that’s the entire (mindset), there are other jobs for the quarterback other than to just throw the ball to the open guy, but there’s a lot that goes into it,” said Buchner, who last season fueled a special-package option in the Irish offense to the tune of 534 yards’ offense and six touchdowns. “You’re sort of placed into this position as a leader, whether you like it or not.

“It’s all about owning that role. Coach Rees does a great job since he knows what it was like. Coach Balis and the strength staff also does a good job with that, and they put you in leadership positions. You’ve got to take those and run with them. They’ve done a tremendous job with, like, you’ve got to learn to be a leader. If it’s certain situations, become friends with the guys in order to lead.”

Learn, not flee, from mistakes is a foundational tenet in Rees’ teachings. His name still dots a number of Top-10 categories in Notre Dame annals, but Rees also remembers the nearly-every-year quarterback battles, mistakes along the way and constant evolutionary demands of the position.

“Honestly, learning from mistakes has probably given me a lot of the information that I’ve needed,” Rees said. “My mom (Susan) did a great job with me, so kudos to her. And I try to instill as many of the things that she’s given me as I can within the players.”

Rees also knows that confidence, that belief within, cannot be faked.

“You have to exude it, so that other guys can feed off of it; but you also have to believe it so that when you go out there you believe that you’re going to make the play,” said Rees, who won 23 games in his playing career as Notre Dame’s starter and has helped the program add another 21 victories in two years as offensive coordinator. “More than anything, all camp for our offense, the theme is we’re building confidence. How we prepare. How we execute. How we answer the bell. How we overcome tough situations. All we’re trying to do is build confidence this camp, and it can’t start anywhere but in our (quarterbacks) room.

“I think you’ve kind of just got to have a bs-meter a little bit, you know? I think real confidence, guys go out there and answer the bell. Fake confidence, they don’t. So at the end of the day, that’s what we’ve got to do.”

That was Rees’ final message to his charges Saturday, in fact.

“We talked about today; he said, ‘Bring a good amount of confidence to the field (Sunday),’” Powlus III said. “So that’s what we’re planning on doing, and when we meet, that’s the same stuff we talk about.

“He wants to give us the confidence to be ready to attack and do our job every day.”