“Everybody’s More Famous When They’re Dead”: The Undertaker’s Ex-wife Sara Once Boldly Warned WWE Legend for Laying His Hands on Her 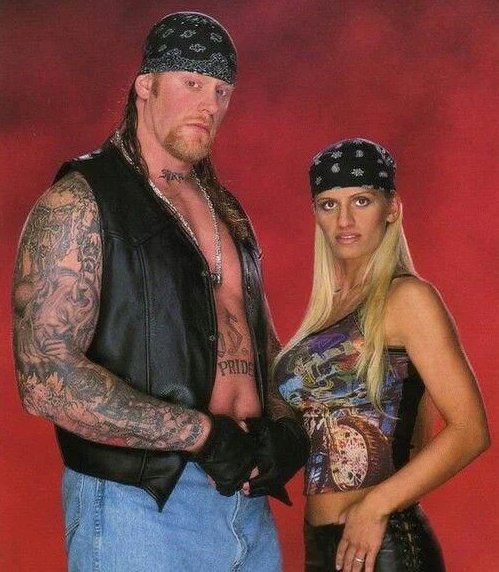 It was a new start in Calaway’s personal life as well. He got married to Sara Frank in 2000. Sara Calaway began appearing in WWE as a valet to the American Badass Undertaker from 2001 to 2002. She divorced Taker after 6 years in 2007, but she’s still remembered by fans for her storyline with Diamond Dallas Page.

Diamond Dallas Page was a promising heel of the Attitude Era, who first appeared in WWE in 2001. On his first appearance, Page uncovered himself as the stalker of Undertaker’s wife. His short feud with the American Badass and his wife was a widespread storyline for a while.

In one of the segments on RAW, Diamond Dallas Page ambushed The Undertaker with a steel chair, leaving him unconscious. When Taker’s wife tried to fight back, Page ripped a bunch of Sara’s hair from her scalp.

On the next segment of RAW, the couple sat down with the WWE veteran Jim Ross, who took the update on the situation from them. Sara described how Taker wanted her to protect her from all the fights in WWE. “It didn’t feel too good having my hair ripped from my head JR. I didn’t ask for any of this. Mark didn’t ask for any of this. As a matter of fact, he has tried to keep me as far away from the business as possible. But Diamond Dallas Page changed all of that.”

The Undertaker was quiet throughout the whole interview, while Sara gave the ultimate warning to Page. Taker’s ex-wife stated that Page attacked them for fame. “As far as Diamond Dallas Page’s concerned, he should be careful what he wishes for cause everybody’s more famous when they’re dead.”

The feud was cut short after Diamond Dallas Page left WWE due to a neck injury. Sara Frank was also written off the show after a while. But it was a memorable storyline for WWE and it was nice while it lasted.