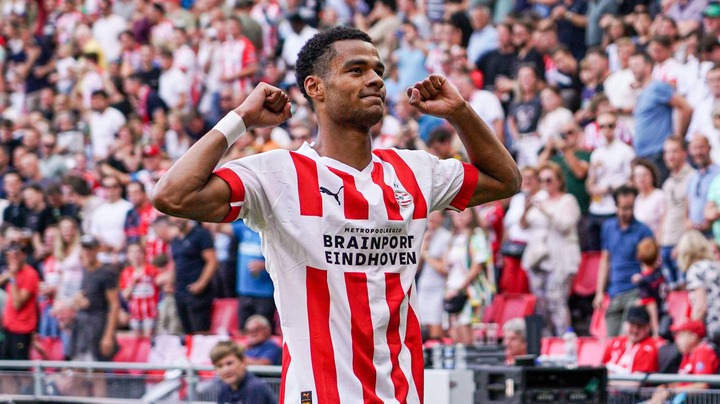 This report comes after it was reported that United have moved away from a transfer for Ajax star Antony, after his club slapped an £80m price-tag on the player.

With a price-tag of around £40m, Gakpo falls into United’s budget category for a striker.

However, renowned journalist Simon Mullock believes that the Red Devils will face competition from Arsenal and Leeds for the striker.

PSV, meanwhile, have informed all potential suitors that they will decide on Gakpo’s fate only once their Champions League qualification fate is decided.

They face a third-round play-off home clash against Monaco on Tuesday night after drawing the first leg 1-1.

If PSV win that game, they will take on either Rangers or Belgian club Union SG for a place in the group stages of the Champions League, a feat which will earn them upwards of £60m.

Mullock adds that Gakpo, who scored 21 goals in all competitions, has been compared to legends like Thierry Henry and Robin van Persie due to his striking instinct.

In a recent interview, he also expressed his desire to play in the Premier League.

Gakpo said, “Those years where Manchester United were superior to anyone in England and in Europe, I found it so impressive. But there are so many great games in England. Look at Liverpool, look at Man City.

“They are all bulging with talent and quality players. When they make a substitution the player coming on is sometimes better than the one who goes off. That is how much quality they have in their squads.”

Speaking about being likened to great strikers, especially with Robin van Persie, Gakpo said, “I really don’t want to compare myself with Van Persie.

“I can only dream of my career heading the same way as his. And I can only hope that I can play for a great club once I go abroad. I know I will have to work really hard to achieve it.”

With players like Marcus Rashford, Jadon Sancho and Anthony Martial either struggling to find form or injured, Ten Hag will most likely prioritise adding a winger towards the end of the transfer window.

This is because with Ronaldo’s situation not clear, it could be that Martial and Rashford might play more central, thus leaving the need for a winger who can add more positive impact on United’s goalscoring.

Manchester United will take on Brighton & Hove Albion on the opening weekend of the Premier League season.